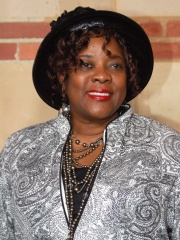 Loretta Devine (born August 21, 1949) is an American actress and singer, best known for her roles as Marla Hendricks in the Fox drama series Boston Public, and for her recurring role as Adele Webber on the medical drama Grey's Anatomy, for which she won a Primetime Emmy Award for Outstanding Guest Actress in a Drama Series in 2011. She had a role in the series Everybody Hates Chris as Rochelle's mother. In film, Devine appeared in Waiting to Exhale, The Preacher's Wife, Hoodlum, I Am Sam, Urban Legend, What Women Want, Kingdom Come, Crash, Woman Thou Art Loosed, Class Act, For Colored Girls, This Christmas, First Sunday, Beverly Hills Chihuahua and Jumping the Broom. Read more on Wikipedia

Since 2007, the English Wikipedia page of Loretta Devine has received more than 1,955,306 page views. Her biography is available in 18 different languages on Wikipedia making her the 3,576th most popular actor.

Among actors, Loretta Devine ranks 3,550 out of 8,832. Before her are Scott Patterson, May McAvoy, Sandy Dennis, Charlene Tilton, Jack Coleman, and Amanda Bearse. After her are Wallace Reid, Betty Field, Kyle Gass, Vesa-Matti Loiri, Neal McDonough, and Cristine Rose.