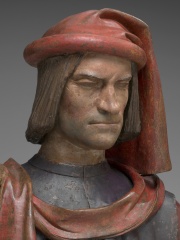 Lorenzo di Piero de' Medici (Italian: [loˈrɛntso de ˈmɛːditʃi]; 1 January 1449 – 8 April 1492) was an Italian statesman, banker, de facto ruler of the Florentine Republic, and the most powerful and enthusiastic patron of Renaissance culture in Italy. Also known as Lorenzo the Magnificent (Lorenzo il Magnifico [loˈrɛntso il maɲˈɲiːfiko]) by contemporary Florentines, he was a magnate, diplomat, politician and patron of scholars, artists, and poets. As a patron, he is best known for his sponsorship of artists such as Botticelli and Michelangelo. Read more on Wikipedia

Among politicians, Lorenzo de' Medici ranks 124 out of 15,577. Before him are Cyrus the Great, Mustafa I, Murad I, Bayezid I, Otto I, Holy Roman Emperor, and Amenhotep III. After him are Xerxes I, Claudius, Mark Antony, Narendra Modi, Bayezid II, and Kim Jong-il.