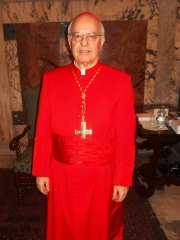 Lorenzo Baldisseri (Italian pronunciation: [loˈrɛntso baldisˈsɛːri]) (born 29 September 1940) is an Italian prelate of the Catholic Church who served as Secretary General of the Synod of Bishops from 21 September 2013 until 15 September 2020. He was made a cardinal in 2014. Read more on Wikipedia

Among religious figures, Lorenzo Baldisseri ranks 1,355 out of 2,272. Before him are Emerentiana, Parshvanatha, Bernard de Montfaucon, Phinehas, Seyyed Hossein Borujerdi, and Anthim the Iberian. After him are Joachim Meisner, Antonio Quarracino, Louis Massignon, Amandus, Theodosius the Cenobiarch, and Marc Ouellet.