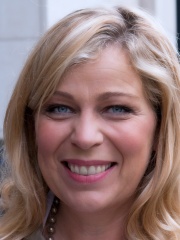 Lone Scherfig (Danish: [ˈloːnə ˈɕɛɐ̯fi]; born 2 May 1959) is a Danish film director and screenwriter who has been involved with the Dogme 95 film movement and who has been widely critically acclaimed for several of her movies, including the Oscar-nominated film An Education (2009). Scherfig's movies are generally romantic comedies, including her film One Day (2011), based on the David Nicholls novel. Read more on Wikipedia

Since 2007, the English Wikipedia page of Lone Scherfig has received more than 164,499 page views. Her biography is available in 20 different languages on Wikipedia making her the 757th most popular film director.

Among FILM DIRECTORS In Denmark