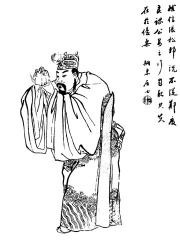 Liu Zhang (pronunciation ) (fl. 190s–210s), courtesy name Jiyu, was a Chinese politician and warlord who served as provincial governor who lived in the late Eastern Han dynasty of China. He became the Governor of Yi Province (covering present-day Sichuan and Chongqing), succeeding his father Liu Yan and ruled the region until 214, when he surrendered to Liu Bei. Read more on Wikipedia

Since 2007, the English Wikipedia page of Liu Zhang has received more than 7,116 page views. His biography is available in 17 different languages on Wikipedia. Liu Zhang is the 3,990th most popular politician (down from 3,546th in 2019), the 306th most popular biography from China and the 187th most popular Chinese Politician.

Liu Zhang was the last ruler of the Shu Han Kingdom. He was most famous for his involvement in the Three Kingdoms War.

Among politicians, Liu Zhang ranks 3,990 out of 15,710. Before him are Fuad II of Egypt, Louis II, Count of Flanders, Marcus Aurelius Marius, Abbas I of Egypt, Daniel arap Moi, and Ardashir II. After him are Labarna I, Antonio I, Prince of Monaco, Charles Frederick, Grand Duke of Baden, Caroline Amalie of Augustenburg, Oscar Luigi Scalfaro, and Pekahiah.

Among people born in 200, Liu Zhang ranks 24. Before him are Zhang Jue, Xiahou Yuan, Gao Shun, Artabanus IV of Parthia, Yu Jin, and Paul of Samosata. After him are Achilles Tatius, Lucius Artorius Castus, Sabellius, Yue Jin, Diogenes of Oenoanda, and Vologases VI. Among people deceased in 219, Liu Zhang ranks 2. Before him is Xiahou Yuan. After him are Pang De and Zhang Zhongjing.