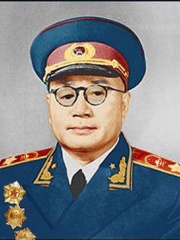 Liu Bocheng (simplified Chinese: 刘伯承; traditional Chinese: 劉伯承; pinyin: Liú Bóchéng; Wade–Giles: Liu Po-ch'eng; December 4, 1892 – October 7, 1986) was a Chinese Communist military commander and Marshal of the People's Liberation Army. Liu is known as the 'half' of the "Three and A Half" Strategists of China in modern history. (The other three are Lin Biao, commander of the CPC, and Kuomintang commander Bai Chongxi, and CPC commander Su Yu.) Officially, Liu was recognised as a revolutionary, military strategist and theoretician, and one of the founders of the People's Liberation Army. Read more on Wikipedia

Among politicians, Liu Bocheng ranks 9,127 out of 15,577. Before him are Huzziya II, Archidamus IV, Lazar Mojsov, Floris II, Count of Holland, Jean-Pierre Raffarin, and Ahn Changho. After him are Zail Singh, Dan I of Wallachia, Prince William of Baden, Alfred Józef Potocki, Katō Tomosaburō, and Sabin of Bulgaria.