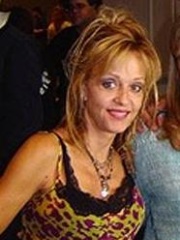 Barbara Linnea Quigley (born May 27, 1958) is an American actress, film producer, model, singer, and author. She is best known as a B movie actress and is often referred to as a "scream queen" due to her frequent appearances in low-budget horror films during the 1980s and 1990s. Born in Davenport, Iowa, Quigley first pursued her career in the late 1970s shortly after moving to Los Angeles. Read more on Wikipedia

Since 2007, the English Wikipedia page of Linnea Quigley has received more than 516,626 page views. Her biography is available in 15 different languages on Wikipedia making her the 6,916th most popular actor.

Among actors, Linnea Quigley ranks 6,868 out of 8,832. Before her are Mylène Jampanoï, Austin Stowell, Katie Barberi, Jane Levy, Danielle Campbell, and Busy Philipps. After her are Mandakini, Ed Speleers, Spencer Treat Clark, Amy Carlson, Will Forte, and Shiloh Fernandez.