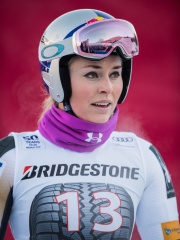 Lindsey Caroline Vonn (née Kildow ; born October 18, 1984) is an American former World Cup alpine ski racer on the US Ski Team. She won four World Cup overall championships—one of only two female skiers to do so, along with Annemarie Moser-Pröll—with three consecutive titles in 2008, 2009, and 2010, plus another in 2012. Vonn won the gold medal in downhill at the 2010 Winter Olympics, the first one for an American woman. Read more on Wikipedia

Since 2007, the English Wikipedia page of Lindsey Vonn has received more than 6,807,156 page views. Her biography is available in 48 different languages on Wikipedia making her the 30th most popular skier.

Most Popular Skiers in Wikipedia

Among SKIERS In United States