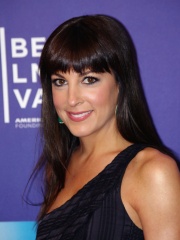 Lindsay Sloane Leikin-Rollins (born August 8, 1977) is an American actress. She is known for playing Valerie Birkhead on Sabrina the Teenage Witch (1997–99) and Emily in The Odd Couple (2015–17). Read more on Wikipedia

Since 2007, the English Wikipedia page of Lindsay Sloane has received more than 1,455,359 page views. Her biography is available in 15 different languages on Wikipedia making her the 7,537th most popular actor.