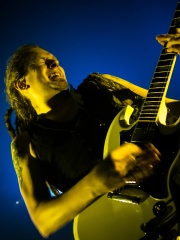 Mikko Viljami Lindström (born 12 August 1976), more commonly known as "Linde", is a Finnish musician and songwriter, best known as the guitarist for the Finnish gothic rock band HIM. Influenced by the likes of Black Sabbath and Steve Vai, Lindström began playing guitar at age ten, joining the band Aurora in his teenage years, where he met Ville Valo. In 1995, the two reformed Valo's previous band HIM, which would go on to release eight studio albums and become one the most commercially successful Finnish bands of all time, and the first to receive a gold record in the United States. Read more on Wikipedia

Among SINGERS In Finland