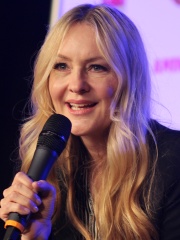 Linda Larkin (born March 20, 1970) is an American actress and voice actress, best known for her role as the speaking voice of Princess Jasmine in Disney's 1992 animated feature film, Aladdin. Read more on Wikipedia

Since 2007, the English Wikipedia page of Linda Larkin has received more than 935,705 page views. Her biography is available in 16 different languages on Wikipedia making her the 8,016th most popular actor.