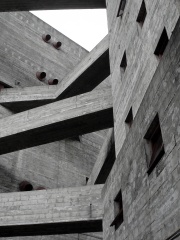 Lina Bo Bardi, born Achillina Bo (December 5, 1914 – March 20, 1992), was an Italian-born Brazilian modernist architect. A prolific architect and designer, she devoted her working life, most of it spent in Brazil, to promoting the social and cultural potential of architecture and design. While she studied under radical Italian architects, she quickly became intrigued with Brazilian vernacular design and how it could influence a modern Brazilian architecture. Read more on Wikipedia

Since 2007, the English Wikipedia page of Lina Bo Bardi has received more than 151,863 page views. Her biography is available in 17 different languages on Wikipedia making her the 163rd most popular architect.