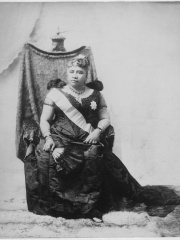 Liliʻuokalani (Hawaiian pronunciation: [liˌliʔuokəˈlɐni]; Lydia Liliʻu Loloku Walania Kamakaʻeha; September 2, 1838 – November 11, 1917) was the only queen regnant and the last sovereign monarch of the Hawaiian Kingdom, ruling from January 29, 1891, until the overthrow of the Hawaiian Kingdom on January 17, 1893. The composer of "Aloha ʻOe" and numerous other works, she wrote her autobiography Hawaiʻi's Story by Hawaiʻi's Queen during her imprisonment following the overthrow. Liliʻuokalani was born on September 2, 1838, in Honolulu, on the island of Oʻahu. Read more on Wikipedia

Liliʻuokalani was the last monarch of the Kingdom of Hawaiʻi. She was the last queen to rule before the kingdom was overthrown by a group of businessmen and American military personnel.

Page views of Liliʻuokalanis by language

Among noblemen, Liliʻuokalani ranks 192 out of 843. Before her are Memnon of Rhodes, Ercole I d'Este, Duke of Ferrara, Guntram the Rich, Princess Ingeborg of Denmark, Caroline, Princess of Hanover, and Edmund Tudor, Duke of Somerset. After her are Cymburgis of Masovia, Anna Maria Luisa de' Medici, Dmitry of Uglich, Marie-Caroline of Bourbon-Two Sicilies, Duchess of Berry, Maria Theresa of Savoy, and Carlota Joaquina of Spain.

Among NOBLEMEN In United States

Among noblemen born in United States, Liliʻuokalani ranks 1. After her are Queen Noor of Jordan (1951) and Princess Leonore, Duchess of Gotland (2014).