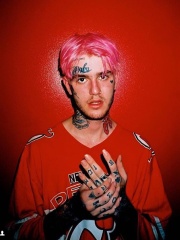 Gustav Elijah Åhr (November 1, 1996 – November 15, 2017), known professionally as Lil Peep (often stylized as LiL PEEP or lil peep), was a Swedish-American rapper, singer, and songwriter. He was a member of the emo rap collective GothBoiClique. Helping pioneer an emo revival–style of rap and rock music, Lil Peep has been credited as a leading figure of the mid–late 2010s emo rap scene and came to be an inspiration to outcasts and youth subcultures.Born in Allentown, Pennsylvania to an American mother and a Swedish father, and raised on Long Island, New York, Åhr started releasing music on SoundCloud in 2013 under the name "Trap Goose," later changing his artist name to Lil Peep because his mother had called him "Peep" since he was a baby. Read more on Wikipedia

Among singers, Lil Peep ranks 920 out of 3,541. Before him are Koko Taylor, Toše Proeski, Anita Hegerland, Margaret Price, Conchita Bautista, and Alejandro Sanz. After him are Adrian Belew, Elisabeth Söderström, Lena Katina, Mel B, Indila, and Rosario Flores.