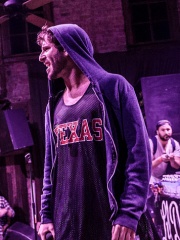 David Andrew Burd (born March 15, 1988), better known by his stage name Lil Dicky, is an American rapper, comedian, and actor. He came to prominence with the release of the music video for his song "Ex-Boyfriend" in 2013, which became popular with more than one million views on YouTube in 24 hours. Read more on Wikipedia

Among people born in 1988, Lil Dicky ranks 339. Before him are Analeigh Tipton, Christine and the Queens, Jun. K, Marek Suchý, Isabella Leong, and Tori Matsuzaka. After him are Diego Buonanotte, Birgit Õigemeel, Jorge Maqueda, Alexander Vlahos, Naldo, and Miguel Layún.