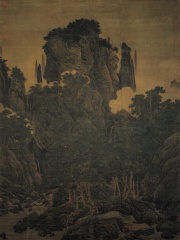 Li Tang (Chinese: 李唐; pinyin: Lǐ Táng; Wade–Giles: Li T'ang, courtesy name Xigu 晞古; c. 1050 – 1130) was a Chinese landscape painter who practised at Kaifeng and Hangzhou during the Song dynasty. He forms a link between earlier painters such as Guo Xi, Fan Kuan and Li Cheng and later artists such as Xia Gui and Ma Yuan. Read more on Wikipedia

Since 2007, the English Wikipedia page of Li Tang has received more than 4,873 page views. His biography is available in 16 different languages on Wikipedia. Li Tang is the 919th most popular painter, the 578th most popular biography from China and the 24th most popular Chinese Painter.

Among people born in 1050, Li Tang ranks 18. Before him are Irnerius, Amadeus II, Count of Savoy, Leopold II, Margrave of Austria, Olaf I of Denmark, Muhammad I of Khwarazm, and Ingvar the Far-Travelled. After him are Ahmad al-Muqtadir, Anselm of Laon, and Isaac Komnenos. Among people deceased in 1130, Li Tang ranks 10. Before him are Isidore the Laborer, Theresa, Countess of Portugal, Bernard of Chartres, Bohemond II of Antioch, Ibn Tumart, and Margaret Fredkulla. After him are Gaston IV, Viscount of Béarn, Aénor de Châtellerault, Al-Amir bi-Ahkam Allah, and Symeon of Durham.

Among PAINTERS In China