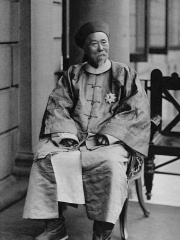 Li Hongzhang, Marquess Suyi (Chinese: 李鴻章; also Li Hung-chang; 15 February 1823 – 7 November 1901) was a Chinese politician, general and diplomat of the late Qing dynasty. He quelled several major rebellions and served in important positions in the Qing imperial court, including the Viceroy of Zhili, Huguang and Liangguang. Although he was best known in the West for his generally pro-modern stance and importance as a negotiator, Li antagonised the British with his support of Russia as a foil against Japanese expansionism in Manchuria and fell from favour with the Chinese after their defeat in the First Sino-Japanese War. Read more on Wikipedia

Li Hongzhang was most famous for his involvement in the Taiping Rebellion. He was a Chinese official and diplomat of the Qing dynasty.