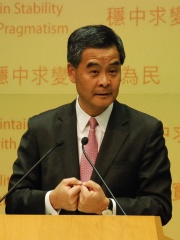 Leung Chun-ying (Chinese: 梁振英; born 12 August 1954), also known as CY Leung, is a Chinese politician and chartered surveyor, who has served as vice-chairman of the National Committee of the Chinese People's Political Consultative Conference since March 2017. He was previously the third Chief Executive of Hong Kong between 2012 and 2017.A surveyor by profession, Leung entered politics when he joined the Hong Kong Basic Law Consultative Committee (HKBLCC) in 1985 and became its secretary-general in 1988. In 1999, he was appointed the convenor of the Executive Council of Hong Kong, a position he held until 2011, when he resigned to run in the 2012 Chief Executive election. Read more on Wikipedia

Among politicians, Leung Chun-ying ranks 10,312 out of 15,710. Before him are Inge Sørensen, David Komnenos, Cniva, Filippo Turati, Conrad I, Duke of Carinthia, and Misael Pastrana Borrero. After him are Enrique Cerezo, Juan García Oliver, Dorothea of Denmark, Duchess of Prussia, Licinius II, Henry Ireton, and Adlai Stevenson I.