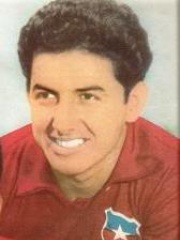 Leonel Guillermo Sánchez Lineros (25 April 1936 – 2 April 2022) was a Chilean professional footballer who played as a striker on the left wing. He is recognized as one of the Best South American Footballers of the 20th Century and one of the great forwards in the history of the FIFA World Cup. He was goalscorer of the 1962 FIFA World Cup where Chile achieved a historic third place in the largest global event for national teams, was part of the ideal eleven of the World Cup and was awarded the Golden Boot and the Bronze Ball from FIFA. He was also included in the top 100 players of the history of the World Cups by FIFA. At the continental level he was part of the ideal eleven of the América Cup 1956, where together with the Chile national team he won a runner-up. Read more on Wikipedia