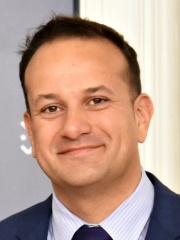 Leo Eric Varadkar ( və-RAD-kər; born 18 January 1979) is an Irish politician and physician who has served as Leader of Fine Gael since 2017 and Tánaiste and Minister for Enterprise, Trade and Employment since 2020. He served as Taoiseach and Minister for Defence from 2017 to 2020, and has served as a Teachta Dála (TD) for Dublin West since 2007. Read more on Wikipedia

Since 2007, the English Wikipedia page of Leo Varadkar has received more than 4,561,497 page views. His biography is available in 48 different languages on Wikipedia making him the 13,318th most popular politician.