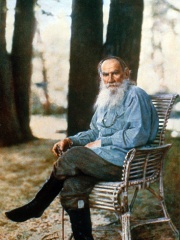 Count Lev Nikolayevich Tolstoy (; Russian: Лев Николаевич Толстой, IPA: [ˈlʲef nʲɪkɐˈla(j)ɪvʲɪtɕ tɐlˈstoj] (listen); 9 September [O.S. 28 August] 1828 – 20 November [O.S. 7 November] 1910), usually referred to in English as Leo Tolstoy, was a Russian writer who is regarded as one of the greatest authors of all time. He received nominations for the Nobel Prize in Literature every year from 1902 to 1906 and for the Nobel Peace Prize in 1901, 1902, and 1909; the fact that he never won is a major controversy.Born to an aristocratic Russian family in 1828, Tolstoy's notable works include the novels War and Peace (1869) and Anna Karenina (1878), often cited as pinnacles of realist fiction. He first achieved literary acclaim in his twenties with his semi-autobiographical trilogy, Childhood, Boyhood, and Youth (1852–1856), and Sevastopol Sketches (1855), based upon his experiences in the Crimean War. Read more on Wikipedia

Leo Tolstoy is most famous for his epic novels War and Peace and Anna Karenina.