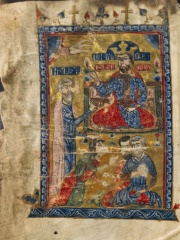 Leo IV or Leon IV (Armenian: Լեւոն Դ, Levon IV) (also numbered Leo V; ) (1309 – August 28, 1341) was the last Hethumid king of Cilicia, ruling from 1320 until his death. He was the son of Oshin of Armenia and Isabel of Korikos, and came to the throne on the death of his father. Read more on Wikipedia

Page views of Leo IV, King of Armenias by language

Among politicians, Leo IV, King of Armenia ranks 9,836 out of 15,710. Before him are Yegor Gaidar, Aemilia Tertia, John George I, Prince of Anhalt-Dessau, Ariobarzanes of Persis, Khawaja Nazimuddin, and Yakov Malik. After him are Beatrice of England, Polina Astakhova, Arechis II of Benevento, Dragan Čović, Yemelyan Yaroslavsky, and Egbert II, Margrave of Meissen.