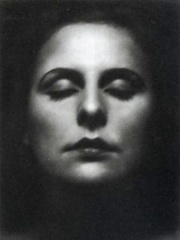 Helene Bertha Amalie "Leni" Riefenstahl (German: [ˈʁiːfn̩ʃtaːl]; 22 August 1902 – 8 September 2003) was a German film director and actress.A talented swimmer and artist, she also became interested in dancing during her childhood, taking dancing lessons and performing across Europe. After seeing a promotional poster for the 1924 film Der Berg des Schicksals ("The Mountain of Destiny"), Riefenstahl was inspired to move into acting. Between 1925 and 1929, she starred in five successful motion pictures. Read more on Wikipedia

Since 2007, the English Wikipedia page of Leni Riefenstahl has received more than 2,211,502 page views. Her biography is available in 74 different languages on Wikipedia making her the 17th most popular film director.