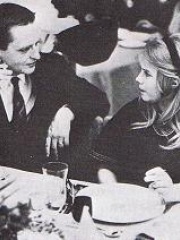 Anna Lena Elisabet Nyman (23 May 1944 – 4 February 2011) was a Swedish film and stage actress. Having had her first film roles in 1955, Nyman had a role in Vilgot Sjöman's 491 (1964) and got her breakthrough in his I Am Curious (Yellow) (1967), where she, in pseudo-documentary fashion, played a character of the same name as herself, and its sequel I Am Curious (Blue) (1968). Nyman won the 1967–68 award for Best Actress at the 5th Guldbagge Awards.She later participated in many of the films and stage productions of Hans Alfredson and Tage Danielsson, such as Release the Prisoners to Spring (1975) and The Adventures of Picasso (1978). Read more on Wikipedia

Since 2007, the English Wikipedia page of Lena Nyman has received more than 103,923 page views. Her biography is available in 18 different languages on Wikipedia making her the 2,322nd most popular actor.

Among actors, Lena Nyman ranks 2,292 out of 8,832. Before her are John Terry, Ferdinand Raimund, Madeleine Renaud, Harry Langdon, Eugene Levy, and Clive Swift. After her are Lesley-Anne Down, Lauren Graham, Robert Foxworth, Mike Connors, Joe Don Baker, and Mark Bernes.