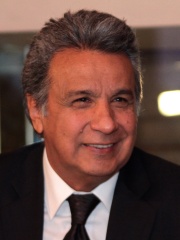 Lenín Boltaire Moreno Garcés (Spanish pronunciation: [leˈnim bolˈtajɾe moˈɾeno ɣaɾˈses]; born 19 March 1953) is an Ecuadorian politician who is the current President of Ecuador, in office since May 2017. Moreno was Vice President from 2007 to 2013, serving under President Rafael Correa. He was nominated as the candidate for Correa's PAIS Alliance, a centre-left, democratic socialist political party, in the 2017 presidential election and won a narrow victory in Ecuador's second round of voting on 2 April 2017. Read more on Wikipedia

Since 2007, the English Wikipedia page of Lenín Moreno has received more than 694,587 page views. His biography is available in 42 different languages on Wikipedia making him the 3,040th most popular politician.

Among politicians, Lenín Moreno ranks 3,018 out of 14,801. Before him are Óscar Arias, Giuseppe Conte, Alexander II of Macedon, Jomo Kenyatta, Mstislav I of Kiev, and Ayas Mehmed Pasha. After him are Günter Schabowski, Yoweri Museveni, Alexander Jannaeus, Ibrahim ibn al-Walid, Ivan Asen II of Bulgaria, and Alexios I of Trebizond.