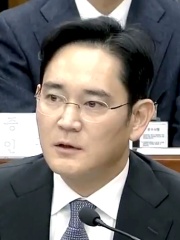 Lee Jae-yong (Korean: 이재용; Hanja: 李在鎔; born 23 June 1969), known professionally in the West as Jay Y. Lee, is a South Korean business magnate and the vice chairman of Samsung, serving as de facto head. He is the eldest child and only son of Hong Ra-hee and Lee Kun-hee, Chairman of Samsung until his death in 2020, and is widely considered to be his father's successor. He is referred to as the "Crown Prince of Samsung" by the South Korean media and speaks Korean, English, and Japanese. Read more on Wikipedia

Since 2007, the English Wikipedia page of Lee Jae-yong has received more than 180,036 page views. His biography is available in 16 different languages on Wikipedia making him the 335th most popular businessperson.

Among BUSINESSPEOPLE In South Korea

Among businesspeople born in South Korea, Lee Jae-yong ranks 2. Before him are Lee Kun-hee (1942).