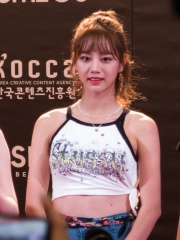 Lee Hye-ri (Korean: 이혜리; born June 9, 1994), better known mononymously as Hyeri, is a South Korean actress, singer, and television personality. She rose to fame as the youngest member of girl group Girl's Day, and was named as the "Nation's Little Sister" by the South Korean media due to her immense popularity after appearing as a fixed cast member on Real Men (2014).She later became known for her leading role in television drama Reply 1988 (2015), which was the highest-rated drama in Korean cable television history at the time. Read more on Wikipedia

Among actors, Lee Hye-ri ranks 8,261 out of 9,996. Before her are Rudy Youngblood, Zachary Scott, Jorge Sanz, Kiele Sanchez, D. B. Sweeney, and Norman Pritchard. After her are Dawn Olivieri, James LeGros, Masami Nagasawa, Chad Coleman, Tino Insana, and Katharine Isabelle.