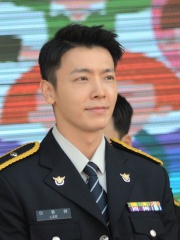 Lee Dong-hae (born October 15, 1986), referred to as Donghae, is a South Korean singer, songwriter, composer and actor. He became a trainee under SM Entertainment after winning a prize at SM's Youth Best Contest in 2001. After four years of training, Donghae debuted as a member of boy group Super Junior in November 2005. Since then, he has risen to prominence due to the group's success on the Asian music scene and further participated in the group's project groups Super Junior-M, Super Junior-D&E. Read more on Wikipedia

Since 2007, the English Wikipedia page of Lee Donghae has received more than 1,297,954 page views. His biography is available in 23 different languages on Wikipedia making him the 1,402nd most popular singer.

Among SINGERS In Korea, South