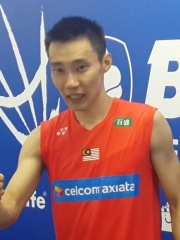 Datuk Lee Chong Wei (born 21 October 1982) is a former Malaysian badminton player. As a singles player, Lee was ranked first worldwide for 349 weeks, including a 199-week streak from 21 August 2008 to 14 June 2012. He is the fourth Malaysian player after Rashid Sidek, Roslin Hashim and Wong Choong Hann to achieve such a ranking (since official rankings were first kept in the 1980s), and is the only Malaysian shuttler who has held the number one ranking for more than a year.Lee is a triple silver medalist at the Olympic Games, and the sixth Malaysian to win an Olympic medal. Read more on Wikipedia

Among BADMINTON PLAYERS In Malaysia

Among badminton players born in Malaysia, Lee Chong Wei ranks 1. After him are Rashid Sidek (1968).