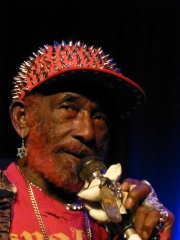 Lee "Scratch" Perry (born Rainford Hugh Perry; 20 March 1936) is a Jamaican record producer and singer noted for his innovative studio techniques and production style. Perry was a pioneer in the 1970s development of dub music with his early adoption of remixing and studio effects to create new instrumental or vocal versions of existing reggae tracks. Read more on Wikipedia

Since 2007, the English Wikipedia page of Lee "Scratch" Perry has received more than 751,361 page views. His biography is available in 24 different languages on Wikipedia making him the 431st most popular musician.