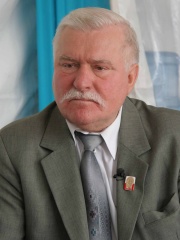 Lech Wałęsa (; Polish: [ˈlɛɣ vaˈwɛ̃sa] (listen); born 29 September 1943) is a Polish statesman, dissident, and Nobel Peace Prize laureate, who served as the first democratically elected president of Poland from 1990 to 1995. A shipyard electrician by trade, he became the leader of the Solidarity movement, and led a successful pro-democratic effort which in 1989 ended the Communist rule in Poland and ushered in the end of the Cold War.While working at the Lenin Shipyard (now Gdańsk Shipyard), Wałęsa, an electrician, became a trade-union activist, for which he was persecuted by the Communist authorities, placed under surveillance, fired in 1976, and arrested several times. In August 1980, he was instrumental in political negotiations that led to the ground-breaking Gdańsk Agreement between striking workers and the government. Read more on Wikipedia

Lech Wałęsa is most famous for being the leader of Solidarity, a Polish trade union that played a major role in the fall of communism in Eastern Europe.

Among politicians, Lech Wałęsa ranks 233 out of 15,710. Before him are Harald V of Norway, Ferdinand II of Aragon, Leopold I, Holy Roman Emperor, Christina, Queen of Sweden, Charles IX of France, and Mahmud II. After him are Sulla, Joe Biden, Olof Palme, Nicholas I of Russia, Konrad Adenauer, and Mehmed I.