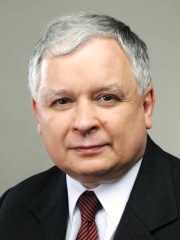 Lech Aleksander Kaczyński (Polish pronunciation: [ˈlɛx alɛkˈsandɛr kaˈt͡ʂɨj̃skʲi] (listen); 18 June 1949 – 10 April 2010) was a Polish lawyer and politician who served as the Mayor of Warsaw from 2002 until 2005, and as the President of Poland from 2005 until his death in 2010. Before his tenure as president, he previously served as President of the Supreme Audit Office from 1992 to 1995 and later Minister of Justice and Public Prosecutor General in Jerzy Buzek's cabinet from 2000 until his dismissal in July 2001. Born in Warsaw, he starred in a 1962 Polish film, The Two Who Stole the Moon, with his identical twin brother Jarosław. Read more on Wikipedia

Among politicians, Lech Kaczyński ranks 1,275 out of 15,710. Before him are Alexios III Angelos, Totila, Archduke Otto of Austria, Francis, Duke of Guise, Stjepan Mesić, and Walther Funk. After him are Perseus of Macedon, Briseis, Theodore I Laskaris, Michelle Bachelet, Johan de Witt, and Maximilian II of Bavaria.