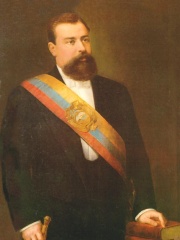 Leónidas Plaza y Gutiérrez de Caviedes (April 18, 1865 – November 17, 1932) was an Ecuadorian politician who was the president of Ecuador for two separate occasions, from September 1, 1901 to August 31, 1905 and again from September 1, 1912 to August 31, 1916. He was the son of José Buenaventura Plaza, a school teacher and, Alegría Gutiérrez de Caviedes Sevillano, an attractive tall woman with aristocratic features and exquisite social manners of Colombian descendancy. He married María Avelina Lasso Ascázubi, with whom he had eight children. Read more on Wikipedia

Since 2007, the English Wikipedia page of Leónidas Plaza has received more than 15,331 page views. His biography is available in 15 different languages on Wikipedia making him the 12,318th most popular politician.