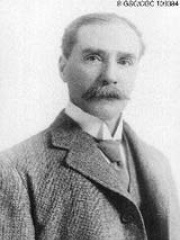 Lawrence Morris Lambe (August 27, 1863 – March 12, 1919) was a Canadian geologist, palaeontologist, and ecologist from the Geological Survey of Canada (GSC). His published work, describing the diverse and plentiful dinosaur discoveries from the fossil beds in Alberta, did much to bring dinosaurs into the public eye and helped usher in the Golden Age of Dinosaurs in the province. During this period, between the 1880s and World War I, dinosaur hunters from all over the world converged on Alberta. Read more on Wikipedia

Since 2007, the English Wikipedia page of Lawrence Lambe has received more than 19,307 page views. His biography is available in 16 different languages on Wikipedia making him the 11,304th most popular politician.

Among politicians, Lawrence Lambe ranks 11,239 out of 14,801. Before him are Diogo Freitas do Amaral, Sewadjkare Hori, Kigeli V of Rwanda, Gunnar Thoroddsen, Juan Crisóstomo Falcón, and Anatoly Chubais. After him are Włodzimierz Cimoszewicz, Vjekoslav Bevanda, Alfredo Cristiani, Edgar Lungu, Sames I, and Higinio Morínigo.