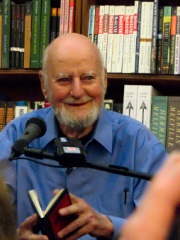 Lawrence Monsanto Ferlinghetti (March 24, 1919 – February 22, 2021) was an American poet, painter, social activist, and co-founder of City Lights Booksellers & Publishers. The author of poetry, translations, fiction, theatre, art criticism, and film narration, Ferlinghetti was best known for his second collection of poems, A Coney Island of the Mind (1958), which has been translated into nine languages and sold over a million copies. Read more on Wikipedia

Among writers, Lawrence Ferlinghetti ranks 2,325 out of 5,794. Before him are Samuel Smiles, Jalil Mammadguluzadeh, Tobias Smollett, Juan Ruiz, Pherecydes of Leros, and Princess Michael of Kent. After him are Matthias Claudius, Jovan Dučić, Théophile de Viau, Emma Orczy, Josef Lada, and Nils-Aslak Valkeapää.