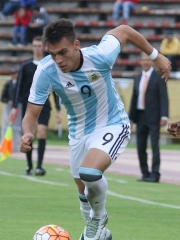 Lautaro Javier Martínez (Spanish pronunciation: [lawˈtaɾo maɾˈtines]; born 22 August 1997) is an Argentine professional footballer who plays as a striker for Italian club Inter Milan and the Argentina national team. He began his football career in his native Argentina where he made his senior debut in 2015 with Racing Club. Read more on Wikipedia

Since 2007, the English Wikipedia page of Lautaro Martínez has received more than 1,662,273 page views. His biography is available in 28 different languages on Wikipedia making him the 3,139th most popular soccer player.