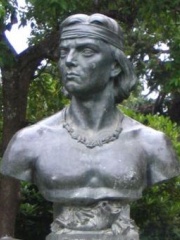 Lautaro (Englished as 'Levtaru') (Mapudungun: Lef-Traru "swift hawk") (Spanish pronunciation: [lawˈtaɾo]; 1534? – April 29, 1557) was a young Mapuche toqui known for leading the indigenous resistance against Spanish conquest in Chile and developing the tactics that would continue to be employed by the Mapuche during the long-running Arauco War. Levtaru was captured by Spanish forces in his early youth, and he spent his teenage years as a personal servant of chief conquistador Pedro de Valdivia, but escaped in 1551. Read more on Wikipedia

Since 2007, the English Wikipedia page of Lautaro has received more than 242,121 page views. His biography is available in 22 different languages on Wikipedia. Lautaro is the 591st most popular military personnel (down from 532nd in 2019), the 20th most popular biography from Chile (down from 19th in 2019) and the most popular Military Personnel.

Page views of Lautaros by language

Among MILITARY PERSONNELS In Chile

Among military personnels born in Chile, Lautaro ranks 1. After him are René Schneider (1913).