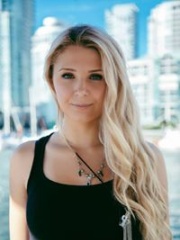 Lauren Cherie Southern (born 16 June 1995) is a Canadian alt-right political activist, white nationalist, and YouTuber. In 2015, Southern ran as a Libertarian Party candidate in the Canadian federal election. She worked for The Rebel Media until March 2017, then worked independently before announcing her retirement from political activism on 2 June 2019. Read more on Wikipedia

Among journalists, Lauren Southern ranks 128 out of 129. Before her are Rémi Ochlik, Natalia Morar, Mohammed Nabbous, Richard B. Spencer, A. O. Scott, and Steven Crowder. After her are Peter Travers.

Among JOURNALISTS In Canada

Among journalists born in Canada, Lauren Southern ranks 2. Before her are Peter Jennings (1938).