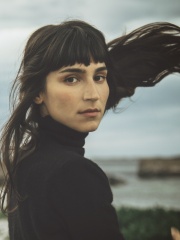 Laleh Pourkarim (Persian: لاله پورکریم‎, IPA: [lɒːleje puːɾkæɾiːm]; born 10 June 1982), known mononymously as Laleh (Swedish: [ˈlɑ̌ːlɛ]), is an Iranian-Swedish singer-songwriter, record producer, guitarist, pianist, actress and record company manager. Following a short acting career, she entered the music industry in 2005 with her self-titled debut album, which peaked at number one in Sweden and went on to become that country's the highest selling album of the year.She has since released seven further albums, all of which have been produced, written, recorded, engineered and performed by herself. She has sung in both English and Swedish, in addition to her parents' native tongue, Persian. Read more on Wikipedia

Page views of Lalehs by language

Among singers, Laleh ranks 2,201 out of 3,541. Before her are Christian Nodal, Yook Sung-jae, Can Bonomo, Mai Charoenpura, Hani, and Marion Raven. After her are Sho Sakurai, Tim McGraw, Carrie Underwood, Aviv Geffen, Teena Marie, and Rob Thomas.

Among SINGERS In Iran