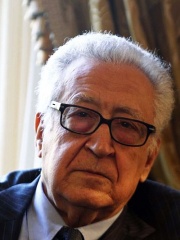 Lakhdar Brahimi (Algerian pronunciation: [læxdˤɑr bræhiːmi]; Arabic: الأخضر الإبراهيمي‎; al-Akhḍar al-Ibrāhīmi; born 1 January 1934) is an Algerian United Nations diplomat who served as the United Nations and Arab League Special Envoy to Syria until 14 May 2014. He was Minister of Foreign Affairs of Algeria from 1991 to 1993. He is also a member of The Elders, a group of world leaders working for global peace. Read more on Wikipedia

Since 2007, the English Wikipedia page of Lakhdar Brahimi has received more than 136,951 page views. His biography is available in 22 different languages on Wikipedia making him the 5,213th most popular politician.

Among politicians, Lakhdar Brahimi ranks 5,183 out of 14,801. Before him are Fatmir Sejdiu, William II, Duke of Bavaria, Ermesinde of Carcassonne, Amadou Toumani Touré, Nicolas Catinat, and Chadae of Goguryeo. After him are Qakare Ibi, Rumen Radev, Sindae of Goguryeo, Burt Munro, Jair, and Yaroslav II of Vladimir.