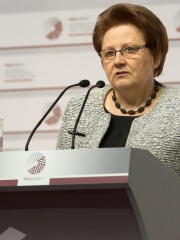 Laimdota Straujuma (born 24 February 1951) is a Latvian economist who was the Prime Minister of Latvia from January 2014 to February 2016. Before her tenure as Prime Minister, she served as Minister of Agriculture from 2011 to 2014. She was the first woman to serve as the head of government of the country. Read more on Wikipedia

Among politicians, Laimdota Straujuma ranks 7,217 out of 15,710. Before her are William VII, Duke of Aquitaine, Al-Mansur Billah, Anthemius, Arybbas of Epirus, Louis of Cyprus, and Eduard Taaffe, 11th Viscount Taaffe. After her are Ernest Louis, Landgrave of Hesse-Darmstadt, Robert Surcouf, Tudḫaliya I, Madius, Jan Peter Balkenende, and William Cavendish-Bentinck, 3rd Duke of Portland.