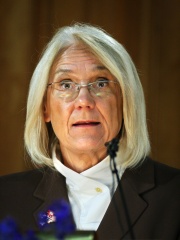 Laila Ligita Freivalds (born 22 June 1942) is a Swedish Social Democratic politician and who served as Minister for Justice from 1988 to 1991 and again from 1994 to 2000, as Minister for Foreign Affairs from 2003 to 2006 and as Deputy Prime Minister of Sweden briefly in 2004. Freivalds was born in Riga, Latvia, during World War II, and escaped to Sweden with her family. She graduated with a Candidate of Law (juris kandidat) from Uppsala University in 1970, after which she served in the Swedish Court System until 1976. Read more on Wikipedia

Since 2007, the English Wikipedia page of Laila Freivalds has received more than 29,100 page views. Her biography is available in 16 different languages on Wikipedia making her the 12,360th most popular politician.