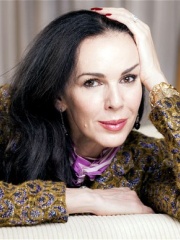 Laura "Luann" Bambrough (April 28, 1964 – March 17, 2014), known professionally as L'Wren Scott, was an American stylist and fashion designer. Scott started her career as a model in Paris before moving to California and styling movie stars such as Madonna and Julia Roberts. In 2006, she launched the first of her fashion collections, characterised by sumptuous femininity combined with unconventional touches, aimed at establishing a well-defined silhouette. Read more on Wikipedia

Since 2007, the English Wikipedia page of L'Wren Scott has received more than 1,536,686 page views. Her biography is available in 17 different languages on Wikipedia making her the 76th most popular celebrity.