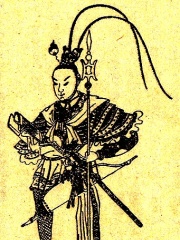 Lü Bu (pronunciation ) (Son of the people) (died 7 February 199), courtesy name Fengxian, was a military general and warlord who lived during the late Eastern Han dynasty of Imperial China. Originally a subordinate of a minor warlord Ding Yuan, he betrayed and murdered Ding Yuan and defected to Dong Zhuo, the warlord who controlled the Han central government in the early 190s. Read more on Wikipedia

Since 2007, the English Wikipedia page of Lü Bu has received more than 1,745,787 page views. His biography is available in 27 different languages on Wikipedia. Lü Bu is the 52nd most popular military personnel (up from 57th in 2019), the 37th most popular biography from China (up from 40th in 2019) and the 4th most popular Chinese Military Personnel.

Lü Bu is most famous for being a general in the Three Kingdoms period of China. He was an important figure in the events leading up to the end of the Han Dynasty and the fall of the Eastern Han Dynasty.

Among people born in 161, Lü Bu ranks 3. Before him are Commodus and Liu Bei.  Among people deceased in 199, Lü Bu ranks 1. After him are Pope Victor I, Yuan Shu, Gao Shun, Gongsun Zan, and Suro of Geumgwan Gaya.