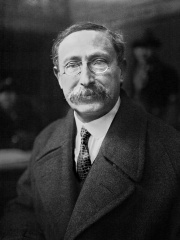 André Léon Blum (French: [ɑ̃dʁe leɔ̃ blum]; 9 April 1872 – 30 March 1950) was a French socialist politician and three-time Prime Minister of France. As a Jew, he was heavily influenced by the Dreyfus affair of the late 19th century. He was a disciple of French Socialist leader Jean Jaurès and after Jaurès' assassination in 1914, became his successor. Read more on Wikipedia

Since 2007, the English Wikipedia page of Léon Blum has received more than 461,956 page views. His biography is available in 50 different languages on Wikipedia making him the 1,363rd most popular politician.

Among politicians, Léon Blum ranks 1,357 out of 14,801. Before him are Constantine VIII, Childebert I, Casimir III the Great, Athaulf, Piero di Cosimo de' Medici, and Uesugi Kenshin. After him are John McCain, Theodore II Laskaris, Asa of Judah, Louis the Child, Octavia the Younger, and Lon Nol.