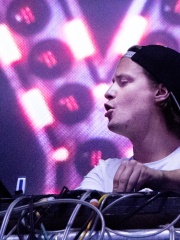 Kyrre Gørvell-Dahll (born 11 September 1991), better known by his stage name Kygo (Norwegian: [ˈkỳːɡuː]), is a Norwegian DJ, songwriter and record producer. He garnered international attention with his December 2013 remix of the track "I See Fire" by Ed Sheeran and his December 2014 single "Firestone". In late 2015, he became the fastest artist to reach 1 billion streams on Spotify, and by June 2016, he had reached 2 billion streams on Spotify.Kygo has since released several singles, such as "Stole the Show", "Here for You" and "Stay" in 2015, "It Ain't Me" in 2017 and a 2019 remix of "Higher Love" performed by Whitney Houston, all of which have debuted on several international charts. Read more on Wikipedia

Since 2007, the English Wikipedia page of Kygo has received more than 3,710,036 page views. His biography is available in 41 different languages on Wikipedia making him the 1,299th most popular musician.

Page views of Kygos by language