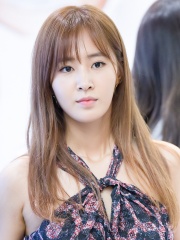 Kwon Yu-ri (born December 5, 1989), better known by her mononym Yuri, is a South Korean singer, actress and songwriter. She debuted as a member of girl group Girls' Generation (and later its subgroup Girls' Generation-Oh!GG) in August 2007, which went on to become one of the best-selling artists in South Korea and one of South Korea's most popular girl groups worldwide. Apart from her group's activities, she has acted in several television dramas such as Fashion King (2012), Local Hero (2016), Gogh, The Starry Night (2016) and Innocent Defendant (2017). Read more on Wikipedia

Since 2007, the English Wikipedia page of Kwon Yu-ri has received more than 958,145 page views. Her biography is available in 27 different languages on Wikipedia making her the 5,863rd most popular actor.