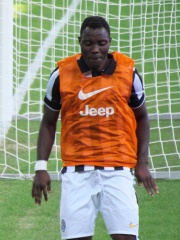 Kwadwo Asamoah (, kwə-JOH ass-ə-MOH-ah; born 9 December 1988) is a Ghanaian professional footballer who plays for the Ghana national team and is currently a free agent. Mainly a left midfielder or left-back, he has also occasionally been deployed as a central midfielder.He began his professional career with Italian club Udinese in 2008; his consistent performances earned him a transfer to Juventus in 2012, where, with his energy, versatility, and technical skills, he played a key role in helping the club to six consecutive Serie A titles between 2013 and 2018, among other titles, although his appearances at the club were limited by injuries during his later seasons. He joined Inter in 2018. Read more on Wikipedia