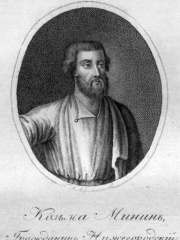 Kuzma (Kozma) Minin (Кузьма́ (Козьма́) Ми́нин; full name Kuzma Minich Zakhariev-Sukhoruky, Кузьма́ Ми́нич Заха́рьев Сухору́кий; died 1616) was a Russian merchant from Nizhny Novgorod, Russia, who, together with Prince Dmitry Pozharsky, became a national hero for his role in defending the country against the Polish invasion in the early 17th century.A native of Balakhna, Minin was a prosperous butcher (meat trader) in the city of Nizhny Novgorod. When the popular patriotic movement to organize volunteer corps in his home city was formed, the merchants chose Minin, a trusted and respected member of the guild, to oversee the handling of the public funds donated by them to raise and equip the Second Volunteer Army (Второе народное ополчение).The army led by prince Dmitry Pozharsky was credited with clearing the Moscow Kremlin of Polish forces on November 1, 1612. Minin distinguished himself as a skilled commander and was made a nobleman and member of the Boyar Duma under the newly elected Tsar Michael Romanov. Read more on Wikipedia