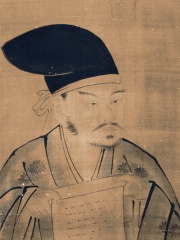 Kusunoki Masashige (楠木 正成, 1294 – 4 July 1336) was a Japanese samurai of the Kamakura period remembered as the ideal of samurai loyalty. Kusunoki fought for Emperor Go-Daigo in the Genkō War to overthrow the Kamakura shogunate and restore power in Japan to the Imperial Court. Kusunoki was a leading figure of the Kenmu Restoration in 1333 and remained loyal to the unpopular Emperor Go-Daigo after Ashikaga Takauji began to reverse the restoration in the Nanboku-chō wars three years later. Read more on Wikipedia

Among politicians, Kusunoki Masashige ranks 6,045 out of 15,710. Before him are Puabi, Rashid Ali al-Gaylani, Takahashi Korekiyo, Joachim Yhombi-Opango, King Zhao of Zhou, and Neferhotep I. After him are Agustín Muñoz Grandes, Józef Beck, Jacques Chaban-Delmas, Yamamoto Gonnohyōe, Hōjō Masako, and Charles Emmanuel, Prince of Carignano.

Among people born in 1294, Kusunoki Masashige ranks 2. Before him is Charles IV of France. After him are Chungsuk of Goryeo, Hugh V, Duke of Burgundy, Simonida, and John of Montfort. Among people deceased in 1336, Kusunoki Masashige ranks 4. Before him are Elizabeth of Portugal, Alfonso IV of Aragon, and Emperor Go-Fushimi. After him are Ramon Muntaner, Arpa Ke'un, John of Eltham, Earl of Cornwall, and Cino da Pistoia.